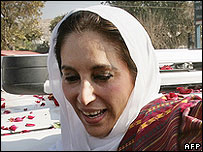 何回も暗殺されそうになっていたパキスタンの元首相ブット氏がとうとう本当に暗殺されてしまいました。
Pakistani former Prime Minister Benazir Bhutto has been killed in a presumed suicide attack, a military spokesman has announced on TV.
ブットもと首相暗殺

Benazir Bhutto 'killed in blast'
Pakistani former Prime Minister Benazir Bhutto has been killed in a presumed suicide attack, a military spokesman has announced on TV.
Earlier reports said Ms Bhutto had only been injured and taken to hospital.

Ms Bhutto had just addressed a pre-election rally in the town of Rawalpindi when the bomb went off.

At least 15 other people are reported killed in the attack and several more were injured. Ms Bhutto had twice been the country's prime minister.

She had been campaigning ahead of elections due in January.

The BBC's Barbara Plett says the killing is likely to provoke an agonised response from her followers, especially from her loyal following in Sindh Province.

The PPP has the largest support of any party in the country.

The explosion occurred close to an entrance gate of the park in Rawalpindi where Ms Bhutto had been speaking.

Some broke the glass door at the main entrance to the emergency unit as others wept.

A man with a PPP flag tied around his head could be seen beating his chest, the agency adds.

An interior ministry spokesman, Javed Cheema, was quoted as saying by AFP that she may have been killed by pellets packed into the suicide bomber's vest.

However, AP quoted a PPP security adviser as saying she was shot in the neck and chest as she got into her vehicle, before the gunman blew himself up.

The killing was condemned by the US and Russia, and a statement is expected shortly from the UK.

The killing undermined reconciliation in Pakistan, the US state department said.

Ms Bhutto returned from self-imposed exile in October after years out of Pakistan where she had faced corruption charges.

Her return was the result of a power-sharing agreement with President Musharraf in which he granted an amnesty that covered the court cases she was facing.

Since her return relations with Mr Musharraf had broken down.

On the day of her return she led a motor cavalcade through the city of Karachi. It was hit by a double suicide attack that left some 130 dead.

Earlier on Thursday at least four people were killed ahead of an election rally that Pakistan's former Prime Minister Nawaz Sharif was preparing to attend close to Rawalpindi.